A Little R and R: Ripken and Rosenthal

I used to think Ken Rosenthal was a jerk. Now I realize he was just doing his job the right way.

With his election to the National Baseball Hall of Fame, Cal Ripken is taking a victory lap around the sports pages, similar, in a metaphoric sense, to the lap he took at Camden Yards in 1995 after breaking Lou Gehrig’s consecutive games streak.

It seems that, over a decade removed from that historical September evening when Cal played in his 2,131st straight game, sportswriters have replaced those eager baseball fans who reached out from the stands to touch a legend. In both cases the observers just want to pat No. 8 on the back and say, “Thanks.”

With so little dissent, it’s fair to call this a case of Americans rallying around the rosin bag. “United We Stand” for our baseball heroes -- sportswriters and fans joining hands in a rare show of national pastime unity.

I’m ready to lay down my blogger’s sword to join hands with those mightier-penned journalists, but before doing so I had to revisit the writing of a journalist whom I’ve long loved to hate: Ken Rosenthal.

Growing up, I had two favorite baseball rivalries: Orioles – Yankees and Rosenthal – Ripken.

Most folks know Ken Rosenthal as a baseball reporter for Fox (his current position), or as a writer for “The Sporting News” (his previous job). To me, he’s always been the negative columnist who consistently attacked the Ripken legend in the pages of The Sun.

A funny thing happened last week, though, as I looked back on some of Rosenthal’s work. The trip down Memory Lane, which intersects with 33rd and Eutaw streets, gave me a greater appreciation for the player and, to my surprise, the writer as well.

To be fair, my youthful animosity toward Ken Rosenthal wasn’t entirely misplaced. Rosenthal has acknowledged, “For better or worse, during my years as a columnist for The (Baltimore) Sun, I played Max Mercy to Ripken’s Roy Hobbs.”

The reference to the movie “The Natural” is, well, natural.

Much like the scene from the movie where Roy Hobbs shattered the press box window with a foul ball, Cal once busted up Rosenthal’s laptop computer in similar fashion.

I still remember Rosenthal’s column that ran the day after the incident. Rosenthal jokingly referenced how the ball arrived right at the time he was writing the words “sit” and “down,” and I thought, “Atta boy, Cal!”

Good had triumphed once more over Evil.

Over time, my perspective on journalism – and sports journalism, in particular – changed. Like so many other fans, I once wanted my media like I want my seventh inning stretch: “Root, root, root for the home team.” So you’ll forgive me if, until now, I’ve had a selective memory about Ken Rosenthal.

So easily forgotten are the (more frequent) columns like this, from the Evening Sun on Sept. 21, 1991:

“Everyone knows the Baltimore Orioles' Cal Ripken is completing a fantastic season, but it's not just any old career year. No, it's one of the greatest all-around seasons by a shortstop in major-league history. Ripken was a likely Hall of Famer even before this year, thanks to his streak of 1,557 consecutive games, record-setting defense and batting prowess while playing a position usually reserved for little guys named Ozzie. But 1991 not only marks a thunderous end to his four-year offensive decline, it could be remembered as the year Ripken began firmly establishing himself as one of baseball's greats.”

I have higher expectations for journalists these days, including sportswriters. My favorite sports writer, Rick Reilly, summed it up best during a Q&A session that followed a speech he gave at the University of North Carolina’s journalism school. When asked which athletes are his friends, Rosenthal responded, “None of them.” He explained that he was supposed to report about athletes rather than be their friends.

That’s what Rosenthal did all along with Cal.

It seems my trip down Memory Lane took an unexpected turn. Given a chance to reconsider my frustration with Ken Rosenthal, my rage has been replaced by respect.

In a town where suggestions that Cal Ripken sit out for a game, or move from shortstop to third base, were considered heresy, Rosenthal wasn’t afraid to legitimately challenge a hometown hero. He ribbed Ripken rather than revere him. After all, that was his job.

Perhaps the most impressive aspect of Rosenthal's writing is that he ultimately wasn’t afraid to admit when he was wrong. After all, baseball isn’t science, even if the stat heads want to make it just that.

In a 2001 column for The Sporting News Rosenthal chronicles the many times that Cal rose to the occasion after the sportswriter questioned the shortstop. The column is the most fitting tribute to Ripken that I've read, even if it came well before his election to the Hall of Fame.

Considering the entertaining rivalry - real and imagined - that existed between The Sun columnist and the Iron Man, Ken Rosenthal deserves the last word about one of Baltimore's greatest sports legends.
at 3:44 PM 4 comments:

Is It Too Late to Trade Brian Roberts? 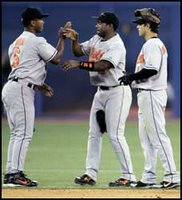 Sentimental feelings won’t get the Birds out of fourth place

Do we love Brian Roberts? Yes.

Does that mean he should not be traded? No.

Roberts has endeared himself to fans for his perennially dirty uniform, for his batting helmet that looks two sizes too big, and for his ear-to-ear grin that we all wish he had reason to flash more frequently. Often, he looks like a little kid out there on the diamond, wearing his glove on his head during the elaborate game of paddycake he plays with Miguel Tejada and Melvin Mora after an O's win.

We've watched Roberts grow up as an Oriole since breaking into the league in 1999, in the process becoming a solid leadoff hitter. He’s also active in many Baltimore charities; last year, he helped organize a $100,000 fund-raiser for the University of Maryland Hospital for Children, which is part of the reason he was nominated for the Roberto Clemente Award for community service.

"Brian Bob is the type of Yankee-killing gamer about whom you write haikus. And we have. Twice," Camden Chat writes on Roberts' page on baseball-reference.com. When sports bloggers compose poetry, you know it's love.

Roberts's biggest fan, though, just may be owner Peter Angelos, who allegedly blocked a trade that would have sent the second baseman and Hayden Penn to Atlanta for Marcus Giles and Adam LaRoche, who hit 30 homers last year in just his third season in the big leagues and who could be just the big bopper that the Orioles have been missing for too long.

But how much will Angelos care for Roberts after the 2008 season, when the second baseman is a free agent and asks for $5 million a year?

LaRoche could turn out to be the next Glenn Davis, but I say that's a trade the organization has to make, regardless of how we feel about Roberts. Landing a young, power-hitting first baseman is the one move this winter that would have dramatically improved the roster.

We've got all winter to ruminate over the seven new free agents GM Mike Flanagan did manage to get past his boss (with a total price tag of $72.8 million). The short answer is that while individually the players are barely above average, collectively they address the team's glaring needs in the bullpen and the middle of the lineup. So the team will be marginally better in 2007. Adding LaRoche would have made a big difference.

But I would have traded Roberts anyway. He's just not as good as we like to think. For the past two seasons, the most similar player to Roberts is Adam Kennedy. That's right, Adam Kennedy. Placido Polanco has also posted similar stats. Would anyone be excited if Kennedy or Polanco was playing second base at Camden Yards? Giles, the player for whom Roberts would have been traded, has higher career slugging and on-base percentages than Roberts.

One of two things will happen to Roberts next season: Either he will fail, for the second year in a row, to repeat his All Star season of 2005, reinforcing the error in not trading him; or, to the joy of Orioles fans everywhere, he will duplicate his career high-water mark from 2005 of 18 homers and a .902 OPS, which while boosting the team's offense in 2007, will only raise his price on the free agent market and increase the likelihood that the Orioles will not be able (or willing) to keep him.

There is an unfortunate precedent for this. See: Ryan, B.J. Before the 2005 season, instead of paying Ryan what he wanted to stay in Baltimore, the Orioles waited for him to leave, which he did the following winter, accepting a five-year, $47 million contract from the Blue Jays, considered a staggering sum at the time. Then the Orioles turned around and spent nearly the same amount, $41.5 million, on three above-average relievers – Jamie Walker, Chad Bradford, and Danys Baez – the very next December to patch a porous bullpen. Imagine how much smarter Sam Perlozzo would have looked if he had Ryan and Chris Ray to pitch the 8th and 9th innings last season.

This is why Angelos doesn't get it. Or should we blame Flanagan and his assistant, Jim Duquette? The key to building a winner is developing young talent and holding on to it – and being smart enough to appraise those players honestly without getting sentimental.

It may be that the Roberts of 2005 was an anomaly, that he is actually closer to average than we would like to admit, in which case it will be easier to replace him. If Brandon Fahey keeps drinking malted milks after school and manages to put on a few pounds, he won't be so far from an adequate replacement.

If the Orioles aren't going to trade Roberts, then they should sign him to a contract extension. But if there's still a chance to swap him for LaRoche, then let's go ahead and make a deal.
at 11:58 PM 1 comment: