So what was it like to attend Orioles FanFest 2011? I can't tell you firsthand given that there's a new baby bird in the nest at home; however, plenty of folks have shared their experiences online. Two of my favorites are reviews of the day as seen through the eyes of a caricature artist and of an autograph hound.

Emily Anthony offers some of her caricature portfolio from a hard day's work at the Convention Center. Where else are you going to get a perspective like that? Thanks, Internet.

Eutaw Street Cardboard is one of at least three different blogs chronicling the experience of a grapher (I just learned that term and I'm not afraid to use it) trying to compile a comprehensive set of all-time Orioles' signatures. In this instance, his post is a fun behind-the-scenes look at the hunt for autographs made more interesting given the controversy over this year's signing policy. Spoiler Alert: "All in all it was a good day."

The Orioles have announced the details of their new FanFest autograph policy, including which players will appear and at what times. There will be five available time slots at four stations with three to four players per station. There also will be a complementary kids area, for which the players appearing won't be announced in advance.


Children ages 4-14 will have a specially designated Kids Only player autograph station presented by ESSKAY that is free of charge and will operate continuously throughout the day. All other ESSKAY autograph stations at FanFest will require the advance purchase of autograph vouchers exclusively at orioles.com for $15 each, with all of the proceeds to benefit children's charities through OriolesREACH.

There will be 250 vouchers available for each autograph session, guaranteeing that each fan purchasing a voucher for a particular session will receive an autograph from each of the players at the station. Fans will be able to print their vouchers at home and must present them to the attendant at the appropriate autograph session, shortening the amount of wait time in autograph lines. Fans must be in line for their autograph session no later than 30 minutes after the session begins.

The complimentary Kids Only area at FanFest will operate throughout the day in a free-flowing system. Players signing in this area will not be announced in advance. Youths ages 4-14 may go through this line as many times as they would like as players rotate through the station.

I won't be at FanFest, but I'd recommend targeting Station 2 at 4:40 p.m. for what I like to call the "Past, Present, and Future" station: Tippy Martinez, Nick Markakis, and Chris Tillman. It's nice to mix in a little history with the current stars. How many times do you think Tippy gets asked about those pick-offs?

The Latest Happenings in Sarasota

Pressbox has provided some interesting details about the upgrades to Ed Smith Stadium, which are being guided by Janet Marie Smith. Smith designed Camden Yards.


Smith has been working with David Schwarz Architects, based in Washington, D.C., and Hoyt Architects, based in Sarasota, to ensure the new Ed Smith Stadium will reflect both the mid-Atlantic origins of the Orioles and the Floridian location in which the stadium resides.

"There will be more orange and black and Oriole birds on this facility before it's over with," Smith said on "Inside PressBox." "There'll be no mistaking that it's our spring training home. It's been beautifully designed. ... David Schwarz, the architect that worked with the local company of Hoyt Architects, really worked hard to develop something that had a real Floridian character."

During their first season in Sarasota, the Orioles set a spring training attendance record, when more than 100,000 fans attended their 14 home games. About 1,500 seats are being brought in from Camden Yards to increase the ballpark's capacity to 9,000.

Here are some photos of the aforementioned Camden Yards seats at Ed Smith Stadium, courtesy of Sarasota friend of the blog Norm Schimmel. 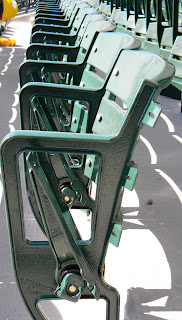 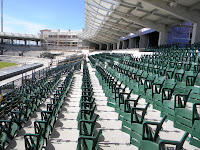 
Between Ed Smith Stadium and Twin Lakes Park, the team's minor league facility that is also undergoing some modifications, the Orioles have nearly 89 acres of space with 10 fields for their major league team and minor league affiliates to use.

One of those fields will now be made of Astroturf, Smith said, because Andy MacPhail, the Orioles' president of baseball operations, thought it would help the team prepare for trips to the Tampa Bay Rays' Tropicana Field and the Toronto Blue Jays' Rogers Centre, both of which boast synthetic turf.

A suggestion by Orioles manager Buck Showalter caused another field to be changed. He took a tour of the facility in September and asked architects to adjust the dimensions of one of the practice fields so it would conform to the specifications of Camden Yards.

Construction is expected to be completed by the time players report to Sarasota on Valentine's Day.  Here are some additional photos of construction in progress, taken in December by Norm. 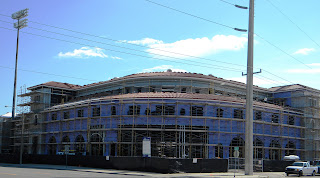 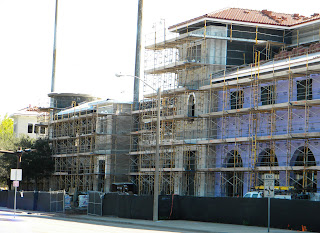 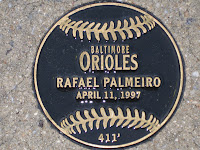 Rafael Palmeiro's five Eutaw Street home runs are the most in the history of Oriole Park at Camden Yards. He got two of them in the same game on April 11, 1997. Palmeiro sent the baseballs a combined 819 feet, pushing the Orioles to a 9-3 victory over the Texas Rangers in the early stages of what became a wire-to-wire run for the Birds in the American League East.

Palmeiro made a routine out of torturing his former employer, posting a .311/.428/.592 career slash line against the Rangers with 15 home runs and 45 RBI in 58 games. Nevertheless, he produced a series of unproductive at-bats early in this game: a double-play ball in the first inning, a strikeout leading off the third, and a ground ball that stranded two runners in the fourth.

He returned to form in the seventh and eight innings by taking first-pitch offerings from lefties Eric Gunderson and Ed Vosberg out of the park. The late-innings binge left Palmeiro with three home runs in his last seven at-bats, all against lefties. His ninth-inning home run sent the team's previous game at Kansas City into extra innings, where the Orioles won 4-2.

"Sometimes, in situations where you're trying to hit the ball hard against a right-hander, you get a little jumpy," said Down. "Against a left-hander, you know you have to stay there and let the ball travel."

Just five days earlier, also against Texas, Mussina served up seven runs on six hits in four innings of work. This after allowing 11 runs in 16 innings in his final three Spring Training outings and skipping an Opening Day start due to bone chips in his elbow.

The game also featured the home debut of Roberto Alomar, who served a five-game suspension to start the season for spitting on umpire John Hirschbeck the previous September.

Like Mussina, Alomar had been limited by injury; a severe ankle sprain caused him to miss the last week of spring training. Alomar went 2-for-4 with an RBI and played highlight-quality defense, including fielding a second-inning grounder that passed through Palmeiro's legs.

"Robby was all over the field tonight, even though there are times when it seems like he can hardly move," said Mussina. 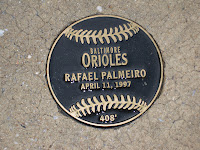 For his part, Palmeiro wasn't concerned about where the spotlight shined.