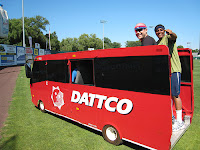 I'm no Whitecap Wendy, but I like Randor Bierd all the same

One of the Orioles' biggest off-season stories last year was the team's $40 million investment in its bullpen. In 2008, the bullpen is getting a face lift - in part due to injury, but you should never underestimate the role of ineptitude in the reconstructive effort.

Having trouble recognizing the new look bullpen? Allow Roar for 34 to help. Here are some details about one of the likely new residents of Dave Trembley's seven-member 'pen, Dominican Republic native Randor Bierd.

(Unwritten - until now - Roar from 34 Rule: Don't get comfortable until your biography appears on the team Web site; Bierd's isn't there at the time of this writing.)

Man in the Middle

What's in a name?

After the Birds acquired Bierd from the Detroit Tigers in December's Rule 5 draft Roch Kubatko commented that the young pitcher's name "sounds like a villain in a James Bond flick." I'll take Bierd's villainous name over the decidedly less-intimidating surname of the guy Pittsburgh drafted in front of him: Evan Meek.

Kubatko notes that the team is also having trouble naming the youngster's pitches:
"Randor Bierd was throwing one pitch between 85-88 mph, and nobody can figure out exactly what to call it. We'll go with Trembley's description of a split and changeup combo."

Bierd says the pitch is a straight change-up he learned from Pedro Martinez: "He taught me the changeup -- and to keep working hard -- around three years ago. He said that people have more experience than I do, but to enjoy what I do and not let pressure get to me. Do what I know and don't be pressured."

Speaking of pitches, Baseball America runs down Randor's stuff: "While Bierd has a swing-and-miss 90-93 mph sinking fastball, his solid-average slider also gets a lot of ground balls. And he has the makings of a third pitch with an average changeup."

If The Detroit News is to be believed (You know how the saying goes: "Don't believe everything you read ... unless it's on a blog that doesn't do original reporting."), the Tigers will miss Bierd. Lynn Henning writes that Bierd was the team's "key loss" in the Rule 5 draft. She quotes Team President Dave Dombrowski, who called Bierd the Tigers' "41st man."

If his connection to Alan Mills doesn't win him any friends in the Birds' clubhouse, Bierd can always trade stories about life in West Michigan with fellow Whitecaps alums Ramon Hernandez (1996) and Scott Moore (2003). He also knows Daniel Cabrera from winter ball. Memo to Randor: It's fine to be friends with Cabrera; just don't follow his lead high and outside the strike zone.

ould see myself myself developing an affection for Randor Bierd, much like the feelings I once had for Chito Martinez. However, I'll never be so foolish as to suggest to Randor, "I'm your biggest fan." Hands down, that honor goes to Flickr fanatic Whitecap Wendy, who loved Mr. Bierd before I even knew him.

If You See Randor on Friday...